The semiconductor industry is suffering through one of the worst supply shortages in history. This shortage has gravely affected hardware makers ranging from smartphone companies to automakers and computer parts productions.

Xiaomi’s president and Redmi General Manager Lu Weibing believes that this global chip shortage will end by the first half of next year. 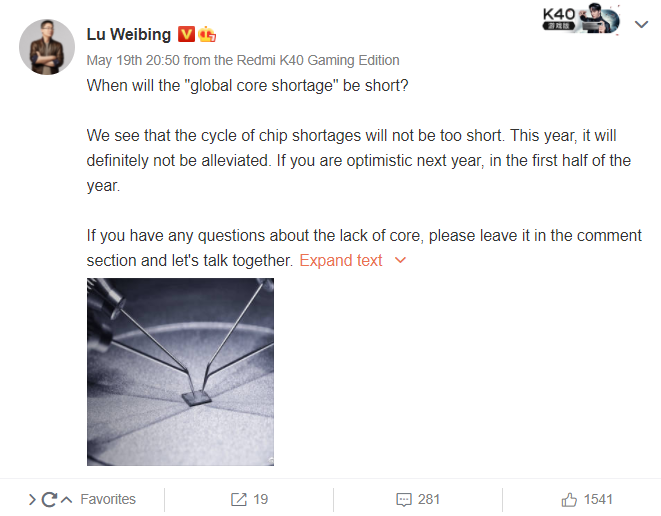 The Xiaomi executive took to Weibo to talk about the ongoing issue. He said that this major semiconductor supply problem is not a short-term issue and it will most likely persist for another year, coming to an end by May or June next year. He also said that this is him being optimistic, which certainly means that there are chances the issue will take longer to subside.

Xiaomi is trying its best to help the tech industry overcome these unprecedented supply chain issues. Weibing is set to discuss the global semiconductor shortage in a public speech later this month on 26th May 2021.

At this point, he also mentioned that the chip shortage is also indicative of the growth in demand for 5G processors in smartphones, along with the growing need for high-performance computing and the in popularity of smart cars and other smart internet of thing products as well.

Hence, in any case, supply has to catch up with the explosive demand that foundries are facing.

realme Makes the Top 6 Globally for the First Time

Xiaomi is Launching a New Smartphone Series Next Week

Over 40 Fintechs are Operating in Pakistan

Quartulain - June 17, 2021 0
The emerging ecosystem of digital financial services coupled with the supportive regulatory environment has provided opportunities for Fintech companies in Pakistan, which has gradually...

Pluralsight is Offering 7000 Courses for Free for One Month