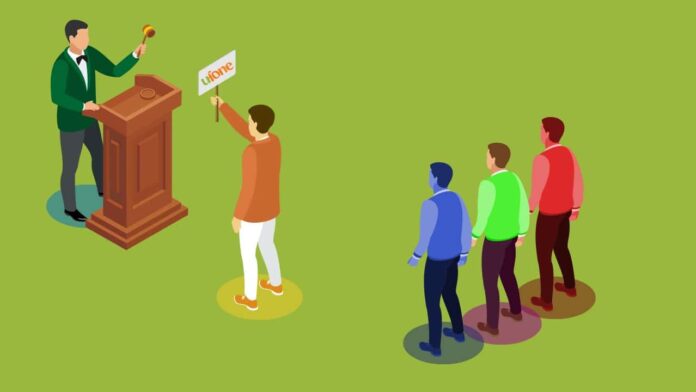 In August this year, Pakistan Telecommunication Authority (PTA) started the process for the sale of additional spectrum to telecom companies.

Besides improving the quality of service for cellular subscribers, the government was eyeing to bring $1 billion from the auction. As it turned out, 3 of the 4 operators chose not to participate in the auction, as was already predicted by some industry experts.

Ufone was the only operator to participate in the spectrum auction and obtained 9MHz spectrum in the 1800 MHz band for $279 million (at the base price).

On September 15, Ufone was awarded the 4G spectrum license. At the signing ceremony, IT Minister Syed Amin ul Haque didn’t miss the chance to lash out at other operators for snubbing the spectrum auction.

But why did Jazz, Telenor, and Zong opt out of the auction? Their apparent rationale was that they had enough spectrum already and didn’t need any more of it, at least for now. (Plus some other reasons that we may discuss another day).

But how valid was that argument? In this piece, we’ll try to deconstruct the spectrum allocations and explore if the justification was well-founded.

To understand whether or not the non-participating cellular operators actually needed additional spectrum, we need to see what their allocations were prior to the latest auction.

The chart below shows the spectrum each telco had under different bands:

While Jazz’s largest spectrum share corresponds to its higher customer base, the numbers are asymmetrical for Telenor who, despite having the second-largest customer base, has less spectrum than its lesser competitor Zong.

Ufone’s lowest share of spectrum, on the other hand, seems fairly comparable to its subscriber base.

By the looks of it, their argument seems well-grounded – the top 3 didn’t participate in spectrum auction because all of them had a larger share of spectrum than Ufone, the only company that partook in the auction.

Did the non-participating telcos actually have enough spectrum?

It’s not uncommon for us to hear users complain about nearly all cellular operators in Pakistan. In fact, all operators failed PTA’s 4G Quality of Service Survey (Q1, 2021) in Lahore. And the performance hasn’t been stellar in other surveys either.

So, do these telcos really have enough spectrum to serve their massive customer bases well? And were they right in keeping their distance from the latest spectrum auction? Let’s find out.

In the chart above, we have divided the user base of each operator by their total spectrum to get how many users (millions) share every 1 MHz available with the company.

While Zong and Ufone have 1.22 million and 1.23 million users per 1 MHz respectively.

It goes without saying that the more users there are per 1 MHz, the worse gets the connectivity experience for the end-user.

And the chart tells us that while spectrum ownership of any operator was not ideal for a worthwhile user experience, Zong and Ufone still fared better than the top two when it came to spectrum availability per user.

Yet, Ufone was the only operator to go for the auction.

But don’t get us wrong. There are many other factors that come into play when user experience is gauged.

From network infrastructure (such as the number of towers) to population density, and from spectrum distribution mechanism to operators’ focus areas, many things affect the quality of service for the end-user.

Yet, spectrum availability is one big factor, and the one relevant to the case at hand.

The operator says this will allow it to improve its quality of service, as well as expanding penetration in different underserved areas.

But how has Ufone’s spectrum addition changed the overall spectrum allocation equation in Pakistan? Let’s find out.

We can see that with the additional spectrum, Ufone now owns a total of 27.6 MHz. Still the lowest in the charts, but surprisingly pretty close to Telenor. But Telenor has about twice the customer base.

You can see where things are going from here.

In the chart above, we can see how the additional spectrum has suddenly made Ufone lead these charts of spectrum availability per user.

Is Ufone’s user experience going to see a massive shift? Are the top two going to see the same mass migration to the ‘lesser’ competition as they did in the past? Only time will tell.

So far, it’s easy to deduce that the operators’ rationale of having ‘ample spectrum’ was weak. So, were there other factors at play causing their disinterest in the auction? Yes.

On condition of anonymity, a C-level executive at a leading telecom company told us that they found the auction terms set by PTA “a bit too harsh”. However, what bones they had to pick with PTA is a topic for another discussion which we will publish soon.

But on our question of whether or not they will participate in the next auction if the terms are to remain the same, the official said that they’ll have to “hunker down in the interest of their users.”

The fact of the matter is that these telecom companies have previously bought spectrum at higher prices too. But yes then USD to PKR rate wasn’t this bad. But then only at that time, they were desperate.

So, are they awaiting that very desperation again? Because – by the looks of it – it’s highly unlikely that PTA will soften its terms in the next auction either.

And when these operators are ready to participate in the next auction in the “interest of users”, they could have made this “sacrifice” in the latest auction as well.

Leaving the gates open for Ufone?

Salman Wassay, a telecom veteran who served at C-level positions at various telecom companies, wrote a remarkable piece on ProPakistani in the wake of the 2014 spectrum auction.

Titled ‘Leaving The Gates Open for Zong’, it chronicled the shocking rise of the underdog that Zong then was. “If the other operators were thinking that Zong would play conservative in going for the licenses, they were only fooling themselves,” he wrote.

“Not only Zong went for full 10 MHz in 3G but also grabbed the 4G spectrum,” Wassay wrote while talking about the 2014 auction.

“Looking at the bidding strategies of all the other operators, all I can say is that they had little or no faith in the Pakistan market. Ufone, Mobilink, and Telenor thought that it was too risky to put in so much commitment in Pakistan,” he wrote.

“On the other hand, the biggest risk taken was by Mobilink by not going for 4G. Mobilink is not only the market leader but also by perception a premium brand.”

“By letting go of the 4G spectrum they not only risked their leadership position, but also left the gate open for Zong to put their foot in the door.”

How Zong rose to become a telecom giant in Pakistan is history.

Salman Wassay’s piece from 2014 still seems valid, but only for a different operator now.

So, it’s plain observation that by not choosing to participate in the spectrum auction, the big two players – Jazz and Telenor – have given Ufone an unmissable opportunity to win a wholly different place in the Pakistani market.

Although Ufone has all the chance to rise to the glory again, they will have to open their pockets (for rollouts at the very least) – something they haven’t done for a long time now.

If missed, they probably won’t be getting this opportunity again, as the window is slim and stakes are high.

Close the Gender Gap: NayaPay Becomes a Friend of CodeGirls

Samsung Galaxy Fold 2 Will Have a 120Hz Punch Hole Display...

Honor 50 Phones Are Coming on June 16

Xiaomi Mi Mix 4 Expected to Launch This Month With MIUI...

ABOUT US
Tech Chacho is your latest tech trends partner. We provide you with the latest breaking news and videos straight from the tech industry.
Contact us: [email protected]
FOLLOW US
© Copyright 2018 - TechChacho All rights Reserved.
MORE STORIES
Telecom