Several of Facebook’s official Instagram and Twitter accounts were hacked yesterday by the same group that hacked ESPN and the NFL’s social media accounts last month. The hacker group then posted an ad for their security services while putting Twitter to shame. 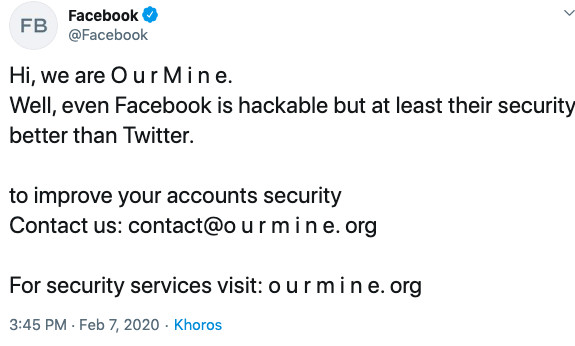 Known as OurMine, the group hacked a dozen accounts in an attempt to expose cyber vulnerabilities. The tweets were posted multiple times before they were deleted. The compromised accounts were restored in less than 30 minutes but the incident highlighted clear vulnerabilities.

As soon as we were made aware of the issue we locked the compromised accounts and are working closely with our partners at Facebook to restore them.

Twitter also confirmed that the accounts were hacked using a third party platform Khoros, which is used by businesses to manage their social media accounts.

All Apple Devices With M1 Processors Have an Irreparable Security Flaw

Apple’s Software Head Admits That Mac Has a Security Problem

Casio Launches its Most Affordable Smartwatch

Quartulain - May 18, 2021 0
Casio has launched its most affordable G-SHOCK series fitness watch that is a mix of digital and analog components. The watch comprises several features...

Samsung May Use MediaTek’s 5G Chipsets For its Affordable Smartphones

Apple’s Software Head Admits That Mac Has a Security Problem