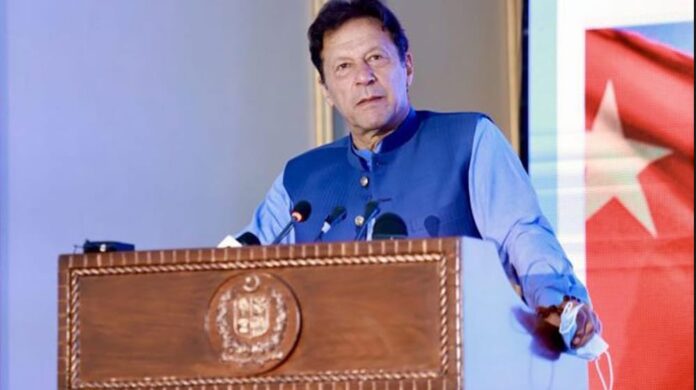 The Prime Minister told the attendees that the technology sector was alone capable to overcome the current account deficit problem being faced in the economy.

Technopolis has been established under Lahore Knowledge Park Company as the PTI government aims to increase IT-related exports.

Imran Khan further said that technology is the future and has great potential. He also gave examples of companies such as Apple and Google, which are generating turnover in trillions of dollars.

The PM also pointed out that tech firms continued to grow even during the pandemic. He said that it was unfortunate to see Pakistan behind in the field of technology despite having an immense young population.

He also added that there is a great opportunity for Pakistan to boost growth through an IT revolution.

The Prime Minister compared Pakistan’s IT sector with India’s, saying that the IT sector in India stood at $150 billion compared to $2 billion in Pakistan, despite the 70 percent growth yearly.

The premier mentioned the reason behind the development of such parks, informing that it was done to give tax breaks to the IT sector. He also said that the government has been trying to attract foreign firms to invest in Pakistan, which would lead to employment for youth.

The IT sector has drastically improved in recent years after the PTI government put it on its priority list under Trade Policy Framework (STPF) 2020-25. The ICT export remittances in Pakistan have increased by 37.57 percent from $764 million during July-November in FY21 to $1.051 billion to FY22.

The PM also highlighted the importance of exports and stated that it was the only way to stabilize the economy and solve the economic problems in the country.

Explore the Gorgeous with vivo and Win Exclusive Gifts

IG Police Wants to Inspect All Mobile Shops in Islamabad

Multinational IT Companies Complain about Inconsistency in Tax Laws

Quartulain - July 8, 2021 0
Multinational information technology companies on Wednesday raised major issues with the government they are facing in the country, including taxes and profit repatriation. A  senior...

StormFiber Expands its 100% Fiber-Optic Network to Sahiwal, Bahawalpur and Parts...

Oppo Find N is One of the Strongest Foldables on the...