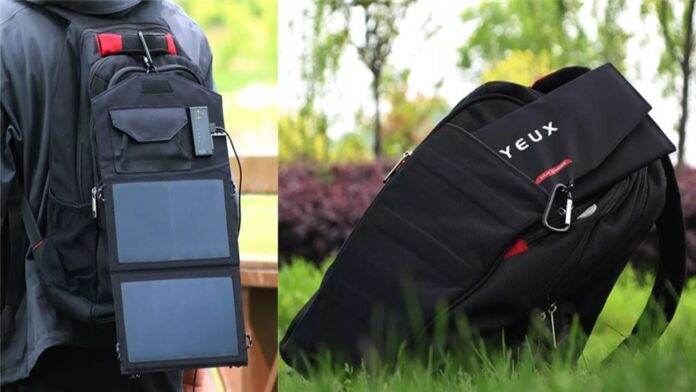 Xiaomi has launched yet another lifestyle product focused on cyclists, mountaineers, and campers. The Yeux mobile solar power bank has been specifically designed keeping long outdoor travel scenarios in mind. Solar-powered power banks have been around for a while now, but Xiaomi just decided to join the bandwagon. The company was supposedly aiming to perfect the technology.

The Yeux mobile solar power bank has been constructed using high-sensitivity, high-conversion, single-crystal silicon solar panels. That, according to Xiaomi, provides an improved and more efficient conversion rate as compared to traditional solar panels. The company claims that these panels can even provide charging on cloudy and rainy days.

The power bank is designed such that the panel can be hung on a backpack to charge while on the move.

The charging board is equipped with solar chip technology, which automatically detects the intensity of sunlight to match the optimal power supply scheme for the load. It comes with lights to indicate the efficiency of sunlight as well. A small legend on the side, shows what a certain color of light means.

As far as the battery capacity is concerned, the power bank packs a built-in 6400 mAh lithium polymer battery that can also be charged using a power source on top of solar power.

The power bank features a three-output interface design with two USB-A ports and a Type-C port. For protection, it is wrapped with encrypted waterproof Oxford cloth that has high light transmittance and aging resistance.

The power bank has been launched on Xiaomi’s Youpin crowdfunding platform with a $49 price tag.

OnePlus Showcases a Concept Device With a Unique Twist

Ayesha Farooq - January 8, 2020 0
OnePlus Concept One, teased last week, has been finally unveiled by the BBK-owned OEM at the ongoing CES 2020. For the first time, OnePlus...

Google Stadia Vs Microsoft xCloud: Which is the Best Online Game...

Hackers Can Now Spy On You Using Light Bulbs