Although Huawei’s P40 phones have all the spotlights right now, the company’s sub-brand Honor has also released a flagship lineup of its own. Just like the Huawei P40 lineup, the Honor 30 series also brings three different phones including the base Honor 30, the Honor 30 Pro, and the top-end Honor 30 Pro+.

The Honor 30 Pro+ is the only phone in the series with a 90Hz refresh rate, a 50MP camera, and a fast wireless charging. Let’s get into the details. 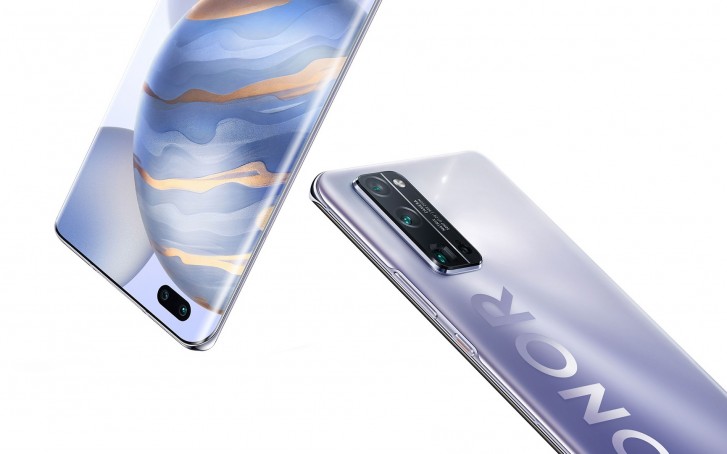 The Honor 30 Pro+ has a 6.57-inch AMOLED display with a 90Hz refresh rate, 180Hz touch sampling, and FHD+ screen resolution. The display has curved edges, an in-display fingerprint sensor, and a pill-shaped punch-hole cutout for the dual front camera.

There is a rectangular shaped quad-camera setup at the back and an immense “Honor” branding underneath it.

The device features Huawei’s in-house flagship SoC, the Kirin 990 5G, which is also found in its Honor 30 Pro sibling. It has 256GB UFS 3.0, but lacks the flagship-grade LPDDR5 type RAM and settles for 12GB of LPDDR4X RAM instead.

For its primary camera, the phone uses the large 50MP Sony IMX700 sensor. The main sensor is accompanied by an 8MP periscope lens with 5x optical zoom, a 16MP ultrawide lens, and a 2MP depth sensor. The main camera is able to record 4K videos at 60 FPS and 1920 FPS slow-motion videos in 1080p.

A 4,000 mAh battery keeps the lights on in the device. It is equipped with 40W fast charging, 27W fast wireless charging, and a 5W reverse charging.

SCO Gets IPTV License from PEMRA

These Are the Most Downloaded Apps & Games Since the COVID-19...

Android May Soon Let You Play Games Before Downloading Them