As the world scrambles to contain the public health crisis that comes with the epidemic, global businesses have taken a hit, particularly the technology industry.

The outbreak of the Covid-19 coronavirus disease, according to the WHO map, has claimed the lives of 2700 people, and more than 80,000 cases have been reported with a total of 34 countries affected.

China, the world’s second-largest economy, has halted the production of consumer goods like phones, clothing, and automobiles for the past few weeks. This situation around the spread of this pandemic has investors around the world in a cold sweat.

As per a report by Forbes, their analysis of nearly 200 conference call transcripts mentioning the words ‘coronavirus’ and ‘outbreak’ paint a clear picture of how corporate leaders are trying to keep investors calm. Even though it is too early to provide any clear-cut numbers, we can still see a global trend caused by the outbreak.

In this article, we break down the extent of damage caused by coronavirus to technology companies around the world.

According to a report by The New York Times, coronavirus cases outside China swiftly rose over the weekend, and it has negatively affected the stock market. Shares of all big tech companies took a hit after a surge in coronavirus cases that reinstated the lurking fears.

Apple, Facebook, Amazon, Microsoft, and Alphabet collectively lost more than $238 billion in value. This was backed by a broader market plunge spurred by the news of the pandemic being out of control again.

These five tech companies put together account for 20 percent of the S&P 500 value, which also saw a decline of 3.4 percent. The Dow Jones and S&P 500, US stock market index, posted their sharpest decline after 2018 and Milan’s stock market plunged nearly 6%. The price of gold hit the highest level in seven years at one point as it’s considered the safest investment and investors don’t want to risk it with the tech companies opting to buy the precious metal instead.

Apple, Facebook, Amazon, Microsoft, and Alphabet lost more than $238 billion in value thanks to coronavirus.

Other than this, as reported by The New York Times, China’s auto sales have declined by 92 percent, and airline revenue is facing a loss of $29 billion as more than 20 international airlines have suspended or restricted routes that end in Wuhan and other Chinese cities.

Tech companies, including Apple, Samsung, Microsoft, Tesla, and Google, temporarily shut down their retail stores, factories, and offices across China; this has played an important role in the plummeting of the stock market. Most of the store closures were expected to end by 9th February, but the tech giants were still only considering retail store reopenings as late as the 17th of February.

If we look back to when SARS (Severe acute respiratory syndrome-related to coronavirus) hit in November 2002, China was not that big of a market, yet the toll on global businesses was substantial. This time around, China is one of the biggest economies in the world, and Wuhan (where patient zero was diagnosed and where it all started) is a manufacturing hub in the country.

Unlike last time, the disruptions to the supply chain are more severe and are expected to have deeper ramifications. China’s annual GDP is expected to take a 0.3-1.5% hit.

Moving on to how tech companies are being affected directly. Apple relies on Wuhan big time for some of its iPhone production and has even warned that the company’s first-quarter earnings can be affected.

At the same time, big automakers like Honda and Nissan also have a significant part of their Chinese production in the Wuhan region. Other than this, one of the largest automakers, Robert Bosch GmbH, recently shut two of its plants in the region in the wake of the situation. Hyundai also just stalled its South Korean production as it ran out of Chinese parts.

Disruptions to the supply chain are severe and are expected to have major ramifications.

Another major company affected by the virus outbreak is Amazon since over 40 percent of the Amazon sellers are based in China. Hence, a large chunk of products bought via the platform comes from the country. Other than this, a large portion of sellers source their stuff from China.

None of this comes as a surprise since China is the largest exporter of intermediate products currently. Hence, if Chinese factories stay offline for a while, its ability to disrupt the global output is quite significant. The worst part is, there is no viable alternative. It takes decades to optimize a sophisticated supply chain that exists in the global market.

Considering a large number of products and their parts being manufactured in China, consumers are warned that they might see delays in tech accessories as well as smartphones, VR headsets, and cars.

Post lunar year holidays, due to the epidemic outbreak, Foxconn’s iPhone city and Pentagon remained closed for an extended period. This unexpected closure will potentially delay the iPhone and AirPods production.

One of the reasons behind this closure is the inability of factory workers to resume work. Travel restrictions have hit migrant workers the hardest. Millions of migrant workers were visiting family outside Wuhan for Chinese New Year and two-thirds of them are stuck outside the city due to these restrictions.

Facebook’s standalone Oculus Quest VR headset is also facing a decline in production as the company has stopped taking orders. Regarding this, Facebook explains:

[Like] other companies we’re expecting some additional impact on our hardware production due to the Coronavirus. We’re taking precautions to ensure the safety of our employees, manufacturing partners, and customers, and are monitoring the situation closely. We are working to restore availability as soon as possible.

Asus also recently warned its fans that ROG Phone II won’t be available until further notice due to the Covid-19 coronavirus disease outbreak:

An open letter to our fans who’ve been waiting to buy the #ROGPhoneII. Thank you for your patience. #WorshippedByGamers #LovedByTechGurus 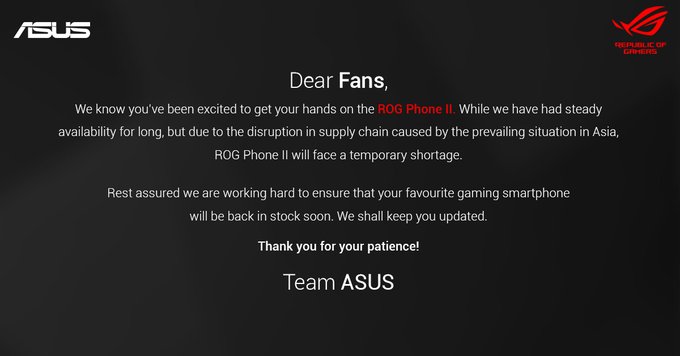 Apart from this, due to factory closures, Tesla has postponed its Model 3 deliveries while Chinese tech giants like Oppo, Xiaomi, Lenovo, and Huawei are also expected to see a delay in production.

According to Peng, a mobile analyst at Canalys,

Companies that rely on components from Hubei will be the most impacted, such as Lenovo. For companies like Huawei, whose operations are in Guangdong, the situation is less difficult, although no company right now will be able to resume factory operations at 100 percent capacity.

Moreover, with a majority of manufacturing done in China, the shipments of Nintendo Switch and Joy-Con controllers will be delayed in Japan. Shipments for the game Ring Fit Adventure will also be postponed since they include an additional peripheral.

The biggest shock to the tech world was the cancellation of the Mobile World Congress 2020. Several companies backed out of the event due to which the GSM Association (GSMA) announced that the event is officially canceled. This had a major impact on smartphone companies worldwide that were looking forward to showing off their latest and greatest flagship devices at the event.

Game developers around the world have limited their travel. Facebook Gaming, PlayStation, Oculus as well as Sony have pulled out of the Game Developers Conference. Sony has also announced that it will be skipping the PAX East event.

Other than this, Huawei’s long-awaited developers’ conference due in February has been postponed until the end of March.

The second week of League of Legends tournament has been delayed indefinitely, and the Overwatch League matches scheduled for February and March in China have been canceled. PUBG’s April global qualifier event has also been postponed indefinitely.

We want to give a quick thank you everyone for the support when we announced our temporary hiatus for the LPL.
We will be hosting an online scrims league starting the 26th. Our primary concern is still keeping everyone safe but we are expecting some great entertaining matches!

Apart from the direct effect coronavirus has had on human life, it is also creating a frenzy around the world. The outbreak is impacting business by reducing demand for products manufactured in China. Some business analysts are hoping that this disruption will slow down in the upcoming weeks; however, since the virus is spreading rapidly, it is hard to predict as of now.

It is still too early to measure the full impact that the tech industry will bear, but it doesn’t look promising so far.

Motorola Razr is The Best Foldable Smartphone Yet