The quarterly report by Counterpoint Research on smartphone SoC shipments has finally been published. During July-September 2021, MediaTek increased its lead over Qualcomm.

Unisoc maintained the record of a third consecutive quarter of growth thanks to its partnerships with Realme, Motorola, ZTE, Samsung, and many others. The company also sold chips to Honor, a brand that once used to rely on HiSilicon.

Thanks to the increasing demands of 4G SoC, MediaTek was able to secure a large chunk of the market share. Plus, shortages of 5G chips were a cherry on top, aiding the company chipsets for 2 out of every 5 smartphones.

Despite disrupted supply chains, Qualcomm was able to acquire 62% of the market share with NR connectivity. Qualcomm acquired dual contractors for manufacturing key components such as the Snapdragon 8-series SoCs and premium 5G modems. 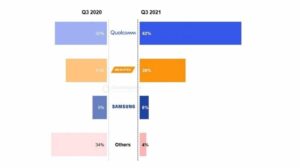 The increase in demand for iPhones driven by Apple’s introduction of the iPhone 13 series in September also helped Qualcomm drive the market share, as the company supplies the modems.

Apple on the other hand maintained its spot as No. 3 in the smartphone chip manufacturer in the world. However, Q4 data will soon reveal the impact of component shortages on the company.

Redmi K50 Series to Come With At Least 4 Different Processors

Computers Are About to Get Even More Expensive

Samsung Shows Off a Major Breakthrough in Computer Memory Technology

PCIe 6.0 Unveiled With Double the Bandwidth Compared to the Previous Generation

Ayesha Farooq - February 13, 2020 0
The Xiaomi Mi 10 is arriving in China tomorrow as the company’s latest flagship smartphone. Some of its rumored specifications have now been confirmed...

Microsoft is Buying Activision in The Biggest Gaming Industry Acquisition Ever

Oppo to Announce Reno 6 Series on May 22