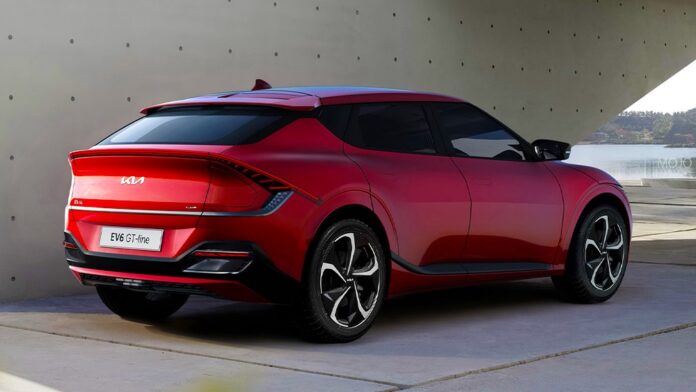 Kia’s EV6 that was introduced just a few months ago has already managed to set a Guinness World Record. It took the record from the best electric vehicle (EV) manufacturer in the world, Tesla, by covering more miles on a lesser charge than the Tesla Model S.

After being charged for almost seven hours and ten minutes, the EV6 made history by traveling 4635.7 km (2,880.5 miles) from New York City to Los Angeles in just over seven days.

The South Korean automaker has notably smashed the record of an EV traveling across the United States by nearly five hours as the Tesla Model S was plugged in for 12 hours, 48 minutes, and 19 seconds for the trip.

EV6 is an exceptional mid-sized crossover EV and definitely one of the best vehicles in terms of its charging speed and practicality. It can be plugged in at DC fast-charging points with the rate of up to 350kW, as Kia claims that EV6 is capable of adding 80.4672 km (50 miles) of range within just five minutes, and the battery pack can be charged from 10 to 80 percent within 18 minutes.

The EV6’s record-setting run is the latest signal that Kia will be a leader in the popularization of EVs. All of Kia’s world-class engineering and experience in EVs will be applied in the move to electrification. The same attention to detail, design, quality, technology, and driving dynamics that Kia has become known for will be found in every new electric vehicle we bring to market.

This is Kia’s first vehicle introduced under its Plan S strategy that was announced on 14 January 2020, which is aimed at establishing a leading position in the future automotive industry.

EV6 has also been awarded the product carbon footprint certification along with the ‘Carbon Measured’ label from global climate change and sustainability consultancy, the Carbon Trust, making it the first Korean automaker to get this qualification.

In light of the dramatic shift in the EV industry, Kia recently announced its plan to introduce its fourth vehicle ‘Carens’ in the Indian market rather than introducing it worldwide.

Sony’s Electic Car Can Be Driven From Another Country

First Amazon Center in South Punjab to be Inaugurated After Eid

MG ZS EV Gets a Huge Price Cut in Pakistan

This Beautiful Wallpaper Can Brick Your Android Phone

Under Display Cameras Are Coming on Smartphones Soon

Blockchain Can Turn Real Estate into the Next Cryptocurrency for the...