The Snap-back continues. Snapchat blew past earnings expectations for a big beat in Q3, as it added 7 million daily active users this quarter to hit 210 million, up 13% year-over-year. Snap also beat on revenue, notching $446 million, which is up a whopping 50% year-over-year, at a loss of $0.04 EPS. That flew past Bloomberg’s consensus of Wall Street estimates that expected $437.9 million in revenue and a $0.05 EPS loss.

Snap has managed to continue cutting losses as it edges toward profitability. Net loss improved to $227 million from $255 million last quarter, with the loss decreasing $98 million versus Q3 2018.

CEO Evan Spiegel  made his case in his prepared remarks for why Snapchat’s share price should be higher: “We are a high-growth business, with strong operating leverage, a clear path to profitability, a distinct vision for the future and the ability to invest over the long term.”

Snapchat’s share price had closed down 4% at $14 and had fallen roughly 4.6% in after-hours trading as of 1:50 pm Pacific, to $13.35, despite the earnings beat. It remains below its $17 IPO price but has performed exceedingly well this year, rising from a low of $4.99 in December. 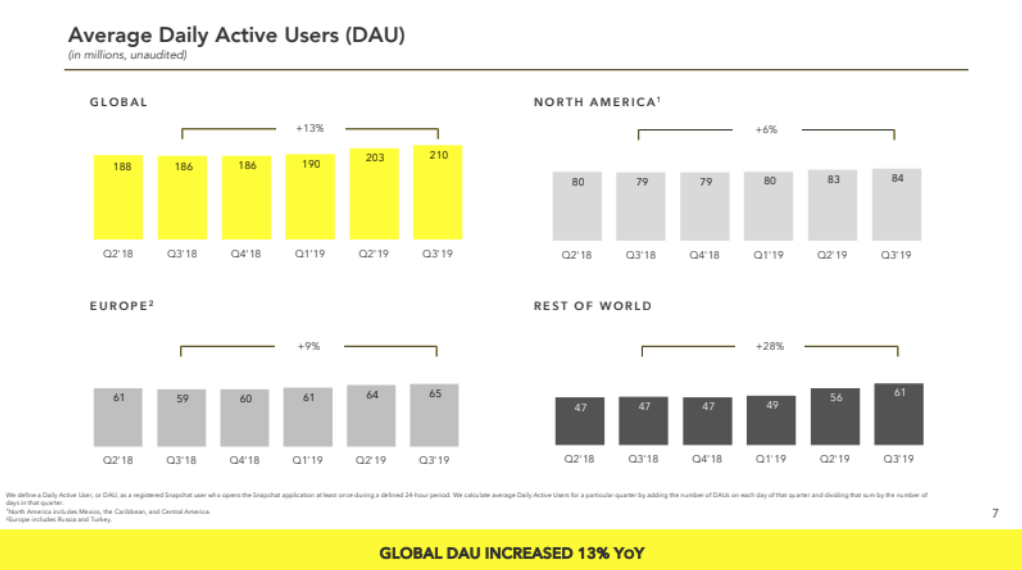 That’s partial because of the high cost of Snapchat’s growth relative to average revenue per user. While it notes that it saw user growth in all regions, 5 million of the 7 million new users came from the Rest of the World, with just 1 million coming from the North America and Europe regions. That’s in part thanks to better than expected growth and retention on its re-engineered Android app that’s been a hit in India. But since Snapchat serves so much high-definition video content but it earns just $1.01 average revenue in the Rest of World, it has to hope it can keep growing ARPU so it becomes profitable globally.

Some other top-line stats from Snapchat’s earnings:

Vivo Smartphones Will Warn You of Earthquakes Before They Occur

Gree is Working on a 5G Smartphone of its Own